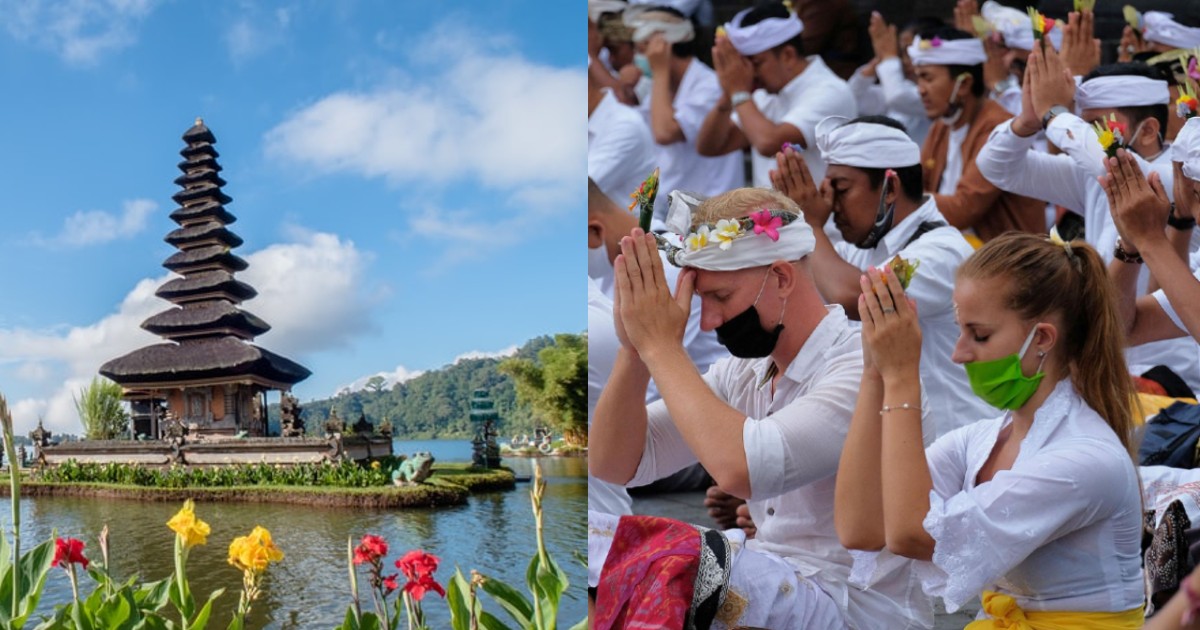 Bali’s population of over 3,000,000 souls spread over the whole island, including those in the smaller islands of Nusa Penida, Nusa Ceningan, Nusa Lembongan, Serangan and Menjangan Island. The overwhelming majority of Balinese are Hindus, with an increasing number of non-Hindu migrating from the closest neighbouring islands of Java and Lombok.

The coastal areas in the south are the most populous area with over 370,000 people living in various professions in the capital of Denpasar. Farming has been the primary way of living in Balinese life. Where else fishing, trading and craftsmanship are also in fashion from generation to generation. Yet with the fast-growing of tourism in the past few decades, young people start to build up a new touch in their living culture.

Life in Bali is very communal under the organization of villages. Temple ceremonies, marriage, cremation, farming and even the creative art festivals are decided by the local community institution called “Banjar”. The responsibilities in day-to-day life are normally administered by both the Banjar and the government. The local government mostly responsible for schools, health clinics, hospitals and roads, and Banjar is responsible for all other aspects of life. There is another association that exists in the Banjar named “Subak” that concerns the production of rice and organizes the complex irrigation system. Every family who owns a rice field must be a member of their local Subak, which then ensures that every member gets his fair distribution of water. A Banjar consists of an average of 50 to 150 family members, owning a meeting venue called the Bale Banjar, which is used for regular gatherings and a centre for local gamelan orchestras and drama groups. 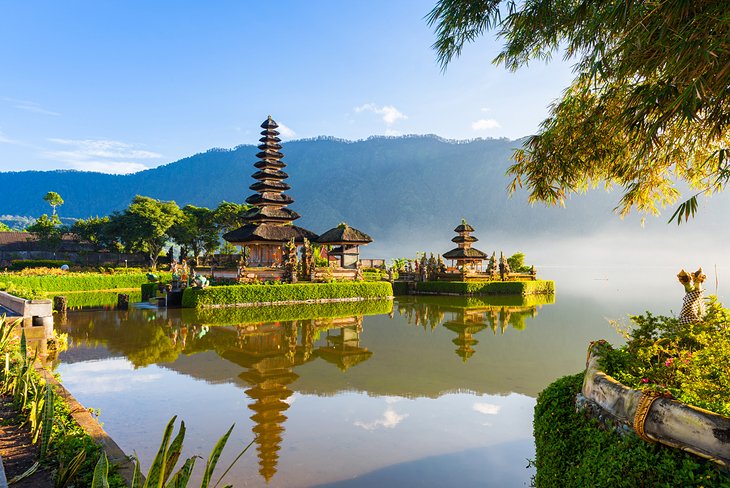 Bali has a long chain of history from the ice-age era (pre-historic time) to the modern, global civilization era. With a dynamic characteristic indicating selectivity and flexibility, the Balinese culture initially reflects a configuration of an expressive culture dominated by religious, solidarity and aesthetic values. Nowadays, it develops along with the adoption of foreign values especially in the aspects of the economic, science and technology, as a result of global modernization.

In general, the history of Bali is divided into three different eras including the pre-historic, the Hindu-Buddhist era and the modern culture.

The pre-historic era in the history of Bali

The pre-historic marked the oldest and simplest way of life, an era of hunting and food-stuff gathering, verified by the discovery of several tools and hunting equipment. In the following era, there were also building construction system and a particular communication system. These were just proofs of the existence and further development of Balinese culture. The Balinese culture flourished that nowadays one can indicate a perfect bond between religions, tradition and culture to become the identity of the Balinese community.

Bali Island was first occupied in 3000 is estimated to-2500SM. Bali’s first inhabitants are immigrants from Asia. There is a historical relic of stone tools from this period, which is found in the village throttle located on the west of the island. Prehistoric times ended at about the entry of 100SM Hinduism and Sanskrit writings from India.

Since then, Balinese culture is much influenced by Indian culture, where the process of inculturation of Indian culture with the indigenous culture is accelerated After the 1st century AD. Since then, the name Balidwipa (Bali Island) began to be found in various inscriptions, including inscriptions Blanjong charter issued by Sri Kesari Warmadewa the 913M and mention Walidwipa said. In this era began to develop estimated irrigation systems subak, and some religious and cultural traditions of Hinduism.
Around the year 1343 AD, the kingdom of Majapahit (1293 to 1500 AD) which is a Hindu kingdom based in Java, has established a subordinate kingdom of the island of Bali. At that time almost all over the archipelago adoption of Hinduism. But with the arrival of Islam, the rise of Islamic kingdoms in the archipelago (one reason for the collapse of Majapahit). When that many nobles, priests, artists, and other Hindu communities moved to the island of Bali.

Portuguese had washed up near Cape hill, which is, in turn, Jimbaran 1585, but the Europeans who first discovered Bali is Cornelis de Houtman from the Netherlands in 1597. Dutch through the East India Company began to implement land occupation in Bali, but continue to get resistance from the people of Bali.

The Dutch seamen were the first Europeans to arrive on Bali and started to introduce western culture in 1597, though they hadn’t discovered any appealing aspect until 1800s.

Starting from the northern region of Bali, since around the year 1840 the Dutch presence has become permanent, which originally began with divide et impera politics or the political contest pitting sheep Balinese rulers that eventually emerged mutual distrust one another. Dutch major attack by sea and land in Sanur area, and followed by the Denpasar area. Bali party who lost in number and weapons not want to experience shame for surrender, thus causing the war to the death or bellows, which involves all the people both men and women including the king. An estimated 4,000 people died in the incident, although the Netherlands has ordered them to surrender. After that, the Dutch governor in charge do not give meaning to cultural influences, religion and culture so that existing generally unchanged.

Around 1846 the Dutch returned with colonization in their minds, having established a strong political base as majority of the Indonesian islands were under their control since the 1700s. The military campaign embarked from the northern coast of Bali. With the help of Sasak people of Lombok, by 1911, all Balinese principalities were under the Dutch control.

Japan occupied Bali during World War II, and then a military officer named I Gusti Ngurah Rai Bali forming forces ‘freedom fighters’. Following the Japanese surrender in the Pacific in August 1945, the Dutch soon returned to Indonesia (including Bali) to re-establish its colonial rule as a state before the war. This was opposed by the opposition forces that Bali is now using Japanese weapons.

On 20 November 1940, fighting broke out in Puputan Margarana happened in the village of Marga, Tabanan, Bali middle. Colonel, I Gusti Ngurah Rai, a 29-year-old, led his troops from eastern Bali to take the offensive until the death of Dutch troops are armed to the teeth. All members of the battalion Bali killed everything, and make it as a military resistance Bali last.

The sense of Indonesian nationalism began to grow after the World War I, with the young generation declaring the national language in 1928, known as Bahasa Indonesia. During the height of World War II the Japanese arrived, expelling the Dutch and ruled the country for about 3.5 years, which ended later in 1945 when Indonesia declared independent led by its very first president, Sukarno. Yet the new-born nation was only recognized by the international community as an independent country in 1949.

Mount Agung eruption occurred in 1963, had shaken the people’s economy and caused many of the Balinese transmigrations to other areas in Indonesia.

With sunshine shining throughout the year, Bali has a tropical monsoon climate, with pleasant day temperatures between 20 to 33 degrees Celsius or 68 to 93 degrees Fahrenheit. The rainy season starts from October to March when the West monsoon brings heavy showers and high humidity. June to September is considered the driest season, with low humidity and it can be fairly cold in the evenings, the best time for any outdoor activities.

Something unique can be found about the climate in Bali. Even when it rains most times in most parts of Bali you can often enjoy sunny days on the “Bukit”, the hill south of Jimbaran. On the other hand, you may expect cloudy skies and drips throughout the year in Ubud and the mountainous areas. Most interestingly perhaps, the international weather reports for “Denpasar” or “Bali” mention showers and rain storms all times of the year. In higher regions such as in Bedugul or Kintamani, you’ll expect to wear either a sweater or jacket when evening falls.

How to get to Bali

With the increasing number of direct flight to Bali from some other parts of the world, it makes it easier to go to Bali. From Bali, the flight to Jakarta is about 1.5 hours, to Singapore and Perth (Australia) 2.5 and 3 hours, to Hong Kong about 4.5 hours, and to Sydney/Melbourne about 5.5 to 6 hours, with various airlines offering their services. Please check at “airline info” for more information about flight schedules. Just make sure you look for “Denpasar (DPS)” instead of “Bali” in airline time tables. It is the capital of Bali. Or you can check your “Travel Agents” for more travel arrangements and accommodation.

Most international visitors are able to fly to Bali directly.

Do you need Visa to Bali?

Indonesian Minister for Economic Affairs, Sofyan Djalil, announced an economic policy package that is to be implement to boost the Indonesian economy, particularly in a move to improve the country’s current account balance, which is the broadest measurement of foreign exchange flows, including trade, services, interest payments and remittances. One new policy change involves visa-free travel into Indonesia. Starting from April 2015, Indonesia will allow foreigners from an additional 30 countries to enter Indonesia without a visa.

Additionally (NOT confirmed), visitors to Indonesia will no longer be required to present arrival and departure cards. The expected date of implementation is 1st of April 2015.
If implemented it will cut down the amount of time required to go through immigration.

Make sure that you have a passport valid for at least 6 months from the arrival date with proof of onward passage.

As for visas, please pay attention to the following :

Tourist Visas
There are about 40 countries granted free entry to Indonesia. Please check with the Indonesian Embassy in your country. The free entry valid for 60 (sixty) days and it is in-extendible

Business Visas
You may apply for a business visa, which valid for 28 (twenty-eight) days and extendible for maximum 6 months.

Special Visas
For some countries without a diplomatic relationship, you may require special visas. Please contact the closest Indonesian Diplomatic office.

Visa on arrival:
For US$ 25 The government may grant you a visa upon arrival which valid for up to 30 days stay in Indonesia and extendible for another 30 days.

64 countries that are eligible for visa-on-arrival when visiting Indonesia:

Countries that do not require a Visa to enter Indonesia:

Visas Of The Republic Of Indonesia:
0Shares
PrevNext